Alright, so there are the unlocked processors of Intel and then those that are meant for newcomers and normal folks. The 7500 CPU is a no-frills simple to use a processor that does not support overclocking (though you can overclock this a bit, which we will discuss later).

This CPU operates at a base frequency of 3.4GHz but boosts up to 3.8GHz when the need arises. Naturally, being a Core i5 it has a total of 4 physical cores and 4-threads with zero hyper threading. The L3 cache is 6MB and it eats around 65W on average which is a good reduction in the power ratings seen with the i5 7600K. 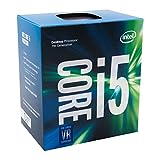 Let’s get straight into the benchmark scores. We have decided to match and compare the Core i5 7500 with its more expensive and endowed sibling, the Core i5 7600K. With a slight pricing range difference between the two, it makes the latter a perfect testing partner.

Because this is not a processor designed for heavy duty tasks, we decided to start it with applications and uses that a normal user might see in his or her lifetime. Games being a major part of the discussion, we began our tests with Ashes of Singularity – a game that truly does push CPUs to their breaking point.

The 7600K brought in just under 30fps and so we were expecting even lower scores from the i5 7500. However, at 26.5 fps on Crazy preset at 1080p, the 7500 CPU did surprise us by its ability to stay close within the reach of the 7600K. Naturally, because the 7600K can be overclocked, it has more potential than the 7500 but in stock setting, the difference is fractional.

Moving on to more intensive CPU tests, we tried it out with Handbrake to convert a large 4K MP4 video file. The i5 7500 managed to complete the task at 42.6 fps, which was only marginally less than the 7600K. Likewise in Pi calculations of WPrime, the 7500 took longer than the 7600K but here it took at least 50 seconds longer when working with 1024M.

With most of our benchmarking software out of the way, it was time to do some real world tests and WinRAR compression was up first. Here, the performance difference between the two processors was marginal at best so nothing really to choose between the two.

Then came gaming tests and we began with Rise of the Tomb Raider at Very High Preset FXAA 1080p with the same graphics card and while the 7600K registered around 117.6 FPS, the 7500 did an impressive 115.7 fps. The difference in FPS on almost all games between the two processors never really went beyond 5fps, which suggests that in gaming circles, the Core i5 7500 manages to maintain its stand against more expensive Core i5 processors.

While this processor isn’t unlocked, with the Z170 or Z270 motherboard you could ideally amp up the clock speed a little using multipliers. The only difference is that these CPUs are not protected under warranty when you overclock them so do this at your peril.

Another really good thing about this latest generation processor is the presence of the HD630 graphics card that is adept enough at playing relatively less demanding game titles at low to medium graphics settings. Then there are the obvious advantages of 7th generation Intel processors such as better support for hardware and faster memory modules.

On the whole, though, these tests figures show that the i5 7500 is an excellent acquisition for those who wish to save some bucks on a processor and motherboard because they want to invest into more memory DIMMs or a better graphics card. With the extra $40 we would suggest investing into an M.2 SSD rather than a conventional SSD – the speed gains are just phenomenal.

Should You Consider This CPU?

If you have access to the Core i5 6500 and it costs less than the 7500 then our advice is to take up the Sky Lake processor. The performance improvements with the new generation aren’t much but Intel wasn’t trying to improve the performance but rather improving the design, manufacturing and hence power consumption – which is what the 7500 does rather well at just 65W TDP.

Serious gamers and enthusiasts who wish to play with default settings, push their PCs to their absolute breaking point will not feel satisfied with the Core i5 7500 due to the lack of overclocking abilities and its modest performance. If you need something that can beat Core i7 processors albeit with proper cooling and voltage management, we advise going up to a Core i5 7600K or even a Ryzen 7 1700.

However, for an average individual who wants to game at the highest settings on a limited budget, it makes better sense going for the Core i5 7500 with a cheaper motherboard but a more expensive graphics card and SSD. After all, for $40 less gaming performance stays the same.

The Core i5 7500 in our opinion is the most game-centric Intel processor. Yes, it suffers in a few applications, can’t match up to higher priced CPUs and lacks more than 4 threads but in games none of this matters as it gives you the exact same performance that a Core I7 7700 does but it costs nearly $100 less too.

For basic browsing, computer work, even programs such as Illustrator and Photoshop, Corel, some amount of 3D rendering and obviously gaming – the Core i5 7500 is a well equipped all-round performer with a convenient price tag too. It does not need an expensive Z series motherboard and all that money you save can be better used to improve overall user experience by investing into more memory, better SSDs and graphics cards. While at it, do yourself a favor and get an awesome case too.