If only a whacky design was everything then the AULA SI-859 would win the gaming peripheral award every year. As it stands, though, this keyboard looks great but doesn’t provide the necessities for a competitive gamer. As for casual gamers who really don’t care about response and precision, the SI-859 is an inexpensive whacky looking gaming keyboard.

Hardcore gamers and serious enthusiasts please stay away from the AULA SI-859 backlit gaming keyboard. Everybody else jumps right in and get this baby before AULA realizes their mistake and bumps up the price beyond $30. 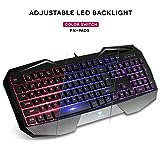 Affordable does not necessarily mean devoid of gaming essentials and the AULA SI-859 proves just that. This beautiful top-grade space-saving gaming keyboard does not just pack in responsive and compact keys into a thin keyboard but also feels great gaming with. Blessed with a dancing set of LED lights, you can choose the backlight color to match your particular mood. Plus, you get an extra-large palm rest that helps manage hand fatigue on long hours of gaming.

AULA isn’t a well-known brand but all you need to know about this brand is that they only making gaming peripherals that don’t cost much and yet somehow manage to meet the performance of their much expensive counterparts. This keyboard weighs just 700g and uses membrane keys with a decent travel of about 2mm with a lower key force of around 50g. For the casual gamer, these specifications are more than sufficient though hardcore professional gamers might find the lack of mechanical keys deterring.

Ever seen a spaceship? Neither have we but if we were to imagine the control panel of a spaceship being QWERTY then it would probably look a lot like the AULA SI-859 Backlit gaming keyboard. The curves on this, those sudden drops and the undulating profile when seen parallel to the table, all work towards establishing it as a serious gaming peripheral. The only question really remains as to whether the keyboard behaves like a gaming accessory or only plays possum.

As it stands, this keyboard packs in the complete array of keys including the numpad with the base backlight instead of each individual key. This is evident as the intensity of the lights differ as you move across the keyboard. Speaking of backlighting, this keyboard offers a total of 3 colors to choose from. There’s the sober blue, the hyperactive purple, and the fiery red. A nice afterthought from AULA especially for those who have gaming rigs that light up a specific wavelength in the dark. Unfortunately, there is no breathing option available on this keyboard that cycles through the colors. Thankfully though there is a total of 4 brightness levels for each color.

Moving on to the keys, they are compact and packed together but because of the lack of spacing between them, those used to expensive mechanical keyboards might need a few days adjusting to the constricted space. I personally felt the keys could have been a bit more spaced apart.

Though the AULA SI-859 packs in a lot of features, we are not sure how many of those features are game oriented. For starters, there are several shortcut function keys that together with the FN key launch the media controls and other shortcuts. But, these have no role to play in a game. In fact, if anything the function is annoying because you can accidentally press it thinking it is the right CTRL or SHIFT key. Probably the only key that has some amount of gaming ideology behind it is the WIN lock key that turns off any Windows related keys so your gaming sessions go smoothly with zero interruption.

This keyboard uses a total of 104 keys out of which six control media functions in tandem with the function key. There are no macro keys or profile selectors on this keyboard and that for us deducts a couple of points from its gaming imagery. As for the keys themselves, they have a decent key force of about 50g give or take 5g but the travel of the keys is only 2mm, which to me is too less. For hardcore gamers who are used to quick combinations and perfection, the low travel of the keys can lead to missed keystrokes. A gaming keyboard regardless of its mechanism should at least have 3.5mm of key travel. Also, this keyboard does not have anti-ghosting all around. As far as we can tell, it has absolutely no anti-ghosting feature, which again is a big negative for something that calls itself a gaming keyboard.

Let’s be honest from the start. Our review on the AULA SI-859 is not biased because it is inexpensive or because it is not a mechanical keyboard. The fact is, if a keyboard is trying to sell itself as a gamer-centric keyboard then it better have the minimum required specifications to match that. First off, we all felt the keys were too compact but in a weird way. While the key surfaces are wider, they are packed closer together because of which, it is really easy hitting the wrong key when you are typing in haste. This is simply poor designing because wider keys require more spacing between them rather than bringing them closer, especially when the keys don’t operate on a mechanical switch. Nevertheless, the keys do become easier to type or play on as time goes by. Our biggest gripe though is the lack of anti-ghosting. There is no protection against ghosting for any of the keys. There are other brands in the market that make keyboards with anti-ghosting for at least the WASD keys and don’t cost more than $30. Nevertheless, the fact that this keyboard is just $22 or so, is probably why we aren’t being too critical.

Other than those two major gripes, it does manage to meet every other gaming requirement. For starters, the backlit keys stand out and in darkness they breathe rather well. Four brightness level is well adjusted and we loved the third brightness level as it wasn’t too in-your-face and neither too dull. Speaking of the overall design, the palm rest is a nice afterthought, though, we don’t necessarily like using a palm rest. However, the design is what caught our fancy. Wow! This thing looks like it dropped out of the speed force as Barry passed throughout timeline. Start your PC and watch as the colors light up on the keyboard accentuating every single curve and cut on the keyboard. This truly is a masterpiece in designing. Pity, they could not pack in a couple more gaming features. At least macro options would have been nice but the good news is that if you want those features then for a few more bucks you can always upgrade to a higher AULA gaming keyboard. One of the models even offers RGB lighting, Macros, Anti-ghosting and mechanical keys!

The AULA SI-859 is the lowest of all its gaming keyboards and while it costs a surprisingly low amount, it does offer some neat features. Backlit keys with three color options, the futuristic design plus distraction-free gaming button are all nice to see in something so affordable. The fact is, if you need a second keyboard so your main expensive gaming keyboard gets some rest when you aren’t gaming then this is a great acquisition. Plus, if anti-ghosting and macros aren’t your thing because you do not game a lot, then to the SI-859 gaming keyboard is a decent choice. Just remember that there are lots of caveats of ownership with the AULA SI-859.