We Recommend The HAVIT HV-KB380L Backlit Gaming Keyboard For

Here’s a membrane type keyboard that meets our seal of approval. The Havit HV-KB380L is a backlit wired gaming keyboard that relies on mechanical Cherry MX type key caps and thus brings in a little bit of the mechanical feel to the midst. Add this with the impressive RGB lighting and anti-ghosting, you start wondering why it sells for so low. Well, that’s how Havit have gone with their pricing policy and they have cut corners almost everywhere but somehow managed to retain just enough to satisfy majority of gamers. Need a new gaming keyboard but lack the budget? Already have a few gaming keyboards and want to freshen up your accessory count? Get this, you simply won’t regret it. 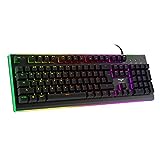 Havit has been in the business of making computer peripherals for the past decade or two. In fact, next year, they will reach their 20-year mark and during this time, they have positioned themselves more as an affordable lower end peripheral maker with a decent lineup that offers a lot more than the competition. The HAVIT wired gaming keyboard codenamed, HV-KB380L is actually one of the most affordable complete gaming keyboard out there in the market. The reason we say this is because it has anti-ghosting, those nice mechanical type keys and RGB lighting but only where it matters. It is kind of hard to explain but the more you read our review, the more you will understand the corners HAVIT had to cut with this keyboard just so that it stays relevant as a gaming keyboard in this price range. This is how you make a product targeting majority of the market and hoping that the bulk of buyers will adopt it, if not the extreme ends.

The design of the Havit HV-KB380L is at par with current generation of gaming keyboards. In fact, if we had not read the features on its packaging, we would never have figured it for a membrane type keyboard. Yup, at first glance this looks like a mechanical keyboard. In fact, the keys come off and can take Cherry MX compatible keys but there is a single membrane layer underneath that captures your inputs rather than individual switches. Nevertheless, it looks fancy and gaming centric. Speaking of looks, the RBG layout of backlighting is simply marvelous. Due to the lack of individual switches, the LED lights are concentrated in specific zones and they spread out through the cracks and crevices thus illuminating the keyboard. This is why the closer to get to the edges of the keyboard, lower the backlighting. By the way, you can’t change the color combination of the lights either. You can choose brightness levels or let it breathe in four different settings. This is already preprogrammed into the keyboard and cannot be altered using third party apps.

As for the construction, it is heavy duty. We were taken aback by the weight of this thing. It uses a complete metal frame and base because of which the keyboard is quite heavy but this does ensure longevity and durability. We are sure this keyboard can take a hit or two.

The keyboard might be cheap but the features it packs is that of a more expensive keyboard. The only thing missing in this keyboard that you will find with $100 and higher keyboards is actual mechanical keys. Nevertheless, these mechanical type keys with a membrane underneath work just as well. In fact, while they retain the feel of mechanical keys to a certain degree, they are way quieter.

This keyboard features a total of 8 sets of anti-ghosting combinations. Pick and choose which set of keys will receive anti-ghosting and program your controls in-game to use these keys only so as to avoid any sort of ghosting issues. Yes, the entire keyboard is not anti-ghosting but only a specific set of keys but that’s better than zero anti-ghosting. Moreover, the majority of gamers need no more than 8 to 10 keys unless they are into hardcore MMOs. This keyboard does not offer any pass-throughs and relies on a single gold plated USB interface. Because it needs no software, it is completely plug-and-play. Oh! One more thing worth mentioning, this keyboard lacks any kind of dedicated media key group. They are bundled into the function keys and you can access them using the FN key plus either of the function keys as is the case with the breathing lights and the LED intensity.

The Performance and Feel

The HAVIT HV-KB380L positions itself as a semi-mechanical keyboard that supposedly gives you the best of both worlds. At first, we were dubious of its dual status and considered it to be a salesman’s trick. However, a couple of weeks later, almost all of us are impressed by just how well it merges the two worlds of gaming keyboards together. First off, it has a complete membrane underneath the keys so in essence, it is a membrane type keyboard. On the top, though, this keyboard uses mechanical style switches. We tried replacing a few switches with Cherry MX replacement switches and they slot in like the keyboard was designed for them only. As for the feel of the keys, yes they don’t have the same travel as a mechanical keyboard but the actuation and force required is there. This plus the lack of a loud click together makes it a satisfying keyboard to tap away on. Typing is a breeze and I personally don’t say that about membrane type keyboards. This though makes the cut.

Moving on to the game-centric features, yet this keyboard does pack in anti-ghosting as we mentioned earlier but it does not cover all the keys. At any given point in time total of 8 keys can have the anti-ghosting property. Basically, it is concentrated in and around the WASD region. To us, this is a nice way to reduce the cost and still provide anti-ghosting technology. No reason why this will be an issue to anyone unless they need the entire keyboard when they are gaming. Besides for casual usage, browsing, coding or typing anti-ghosting is not a necessary feature.

Speaking of the breathing lights, well they are RGB but faux RGB at best. You can’t change the lights from one end to the other. They are predefined thus the left stays on at green, the middle illuminates to red and the far right goes into the blues. That’s about it when it comes to color choices. Thankfully though the brightness and breathing controls are aplenty on this keyboard. Overall, we had an amazing time playing around on this keyboard and it did not fail to satisfy us in any department. Yes, it isn’t exactly a mechanical keyboard but it does have everything else necessary for a rewarding gaming session.

The Havit HV-KB380L backlit gaming keyboard is a jack of all trades and it does not hide this fact. The company is honest in its descriptions online saying that while it is almost like a mechanical keyboard, it still operates off a single membrane underneath all the keys. But where it scores heavily is in the gaming-centric features. Anti-ghosting on most frequently used keys, removable key caps, heavy base and frame, RGB lighting all across the keyboard are all things you search for in more expensive keyboard brands and models. The Havit brings all this for an incredibly affordable price range – now isn’t that great?