We’ve heard some less-than-stellar ViewSonic experiences in the past, so we were curious to get our hands on this well-liked VX2452MH model. We gave it a thorough Armchair Empire testing, and walked away very impressed – this ViewSonic is a very solid entry into the pantheon of mid-range gaming monitors.

I don’t think ViewSonic is always known for great-looking technology, but I really like how this particular monitor looks. The housing is a glossy black plastic, and the bezel is suitably thin. It’s not the smallest bezel out there, but the sizing suits the look and feel of the monitor.  You’ll also find clear plastic trim around the bottom edge of the monitor – overall, the unit looks much more expensive than it actually is.

The ViewSonic’s stand is a typical oval stand. It’s glossy black to match the bezels, but there’s nothing especially interesting about it. The stand does not allow for vertical adjustment of the monitor, and you have limited tilt and rotation capabilities. Honestly, the stand is one of the weaker aspects of this monitor. It does seem a bit flimsy overall, so I’d be careful about moving the monitor frequently.

On the right-hand side of the monitor, underneath the bezel, you’ll find four physical function buttons alongside a power switch. These map to the typical functions – contrast, brightness, “temperature” settings, and so on.

The VX2452MH features a 24-inch TN panel display, operating at a Full HD native resolution of 1920×1080 pixels. The screen does come with an anti-glare coating as well, which I thought was well-done. You can expect a maximum measures brightness of 300 nits from this monitor. As for input options, you have three with this  ViewSonic – HDMI, DVI, and VGA. 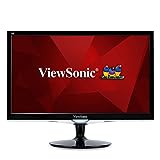 Before you get hung up on specific numbers, you should know that this monitor is a fantastic option at the price point. It might not feature the fastest response time, best color reproduction, or lowest input lag, but the specs it does offer are essentially best in class for mid-range monitors.

The VX2452MH utilizes TN panel technology and operates at a dynamic contrast ratio of 50,000,000:1. Manufacturers like throwing huge contrast ratios at you in an effort to impress, but all you need to know here is that the picture contrast is very good for a TN panel.

This unit also has a very low 2ms pixel response time, which is perfect for gaming. The lower the response time, the less “blurring” and choppiness you’ll see during video game and movie sequences with a lot of quick motion in them. This is key for gamers playing fast-twitch games like most shooters are.

Armchair Empire panel type disclaimer: We always like reminding our readers about the differences between panel technologies in gaming monitors. Typically, you’ll run into 3 different panel types – IPS, VA, and TN. The VX2452MH is a TN panel, and TN panels are typically known for worse viewing angles and color reproduction, although they do tend to feature better refresh rates and faster response times.

I was very impressed while testing the VX2452MH. Most mid-range monitors skimp out on something or other in order to keep the price reasonable, but ViewSonic really didn’t cut any blatant corners here.

TN panels are usually known for sub-par color contrast and bad viewing angles, so imagine my surprise when I found neither present in the VX2452MH. The viewing angles obviously aren’t quite as great as those of a true IPS panel, but they’re as good as you’ll ever get from a TN panel.

As for contrast, color reproduction was excellent across the board. Blacks were deep and dark, and whites were crisp and bright. Many TN panels suffer from a washed out, “newspapery” color tint at certain levels, but I didn’t get any of that with this ViewSonic model.

I will say you may have to play around with the color calibration, brightness, and so on when you first set the monitor up. Very few TN panels will look great out of the box. Don’t be discouraged, though – any reviews you read out there claiming that the VX2452MH looks downright bad most likely haven’t taken the time to properly calibrate the display.

The variable refresh rate and the ultra low 2ms response time are both spot- on for gaming. I threw both Overwatch and Battlefield at the VX2452MH, and I was extremely happy on both counts. I didn’t notice any motion blur or smudging thanks to the low response time, and screen tearing was minimal at best. It’s important to understand that you won’t completely eliminate screen tearing unless you splurge for a more expensive 144hz monitor.

Note: There is a different version of this same monitor that ships with AMD’s FreeSync technology, although it’s a bit more expensive than the base model. FreeSync allows your monitor refresh rate to sync with your GPU’s framerate in order to drastically cut down on / eliminate screen tearing. The FreeSync model does ship with a DisplayPort input as well, as the FreeSync technology only works when using a DisplayPort input.

The VX2452MH does come with ViewSonic’s “Game Mode” setting built in. Game Mode will automatically brighten dark scenes for you, which can be a huge advantage in video games with dark settings. You can turn Game Mode on and off with the touch of one of the monitor’s physical buttons – it couldn’t be easier to switch on and off.

The VX2452MH is also ENERGY START certified and comes with ViewSonic’s Eco-mode setting which helps to conserve even more energy while gaming by automatically adjusting your display’s brightness.

ViewSonic did equip this model with built-in speakers as well, which can be a nice addition if you don’t already have a separate audio setup for your rig.

The unit features a VESA-mountable design as well, which is always nice to see if you’re contemplating a wall mount at any point in the future. It ships with both a VGA and DVI cable included!

The ViewSonic VX2452MH is definitely a gaming monitor. VewSonic made sure to check all of the important technical boxes for gamers, and threw some extra modes and settings in too.

While this is a gaming-specific monitor, it will honestly suit just about any user well. The only time you might want to consider a different monitor is if you’re a graphic designer or otherwise dependent on absolutely perfect picture quality and viewing angles.

The VX2452MH is a fantastic mid-range gaming monitor by ViewSonic. It might not hold up to more modern, fancier 144hz gaming monitors with 1ms response times, but it also costs a fraction of what you can expect to spend on such high-tech models. This monitor is perfect for casual and hard-core gamers alike, and won’t break the bank.