We’re all pretty familiar with ASUS’s work these days. They’re not exactly flying under the radar with all of their peripherals, machines, and everything else they manufacture. They’ve been making mice for quite some time, and one of their newest and most comprehensive offerings – the Republic of Gamers (ROG) Spatha RGB Wireless/Wired mouse – is one worth at least a few hundred words. It’s big, brash, and doesn’t seem to want to apologize to any of the other gaming mice currently on the market.

Here, it’s our aim to review this bad boy and tell you some of our thoughts on it. In a few words – we like it! That said, there’s a lot of stuff that we feel that we should discuss. 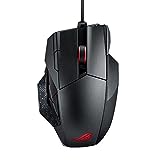 Well, where do we start? The ROG Spata is probably one of the biggest mice that you can buy. It’s going to demand a fair amount of real estate on the desk. Of course, it almost goes without saying that this is a mouse that is a mouse designed for a person with larger hands. That’s not to say that a smaller-handed person can’t use it, but there certainly are more comfortable mice – even from ASUS – that may be a better fit. Even for normal size hands, it may be a bit awkward.

With something as large as the ROG Spata, you’d probably expect for the weight to be up there, as well. You’d be correct in that assumption. The Spatha weighs close to 180g, which is more than 50g more than its next competitor. It’s true that this may not be as important to some as it is to others, it is worth mentioning that a whole host of companies have managed to consider the weights when they’ve made a mouse of this type. You always get the feeling as if it’s a chore to move the mouse around because of it’s weight, even though it definitely does look good while you’re doing it. You’re pretty good if you can get past that.

We say that because it really is one of the coolest looking mice that we’ve had the pleasure to review. Honestly, it’s almost half conversation piece along with its inherent functionality. Delving more into its looks and surface, the ROG Spatha is super-grippy, so you won’t have to worry about dropping the thing. Furthermore, with amazing angular styling, you won’t find it to be a very uncomfortable hold – if even unwieldy for your tastes. There’s also plenty of cool jaggies that make it look like a spaceship of some sort, so that’s definitely a plus. Last but not least, it’s definitely a palm grip mouse. We don’t think you’ll get anything else here.

The mouse also has more than 12 programmable buttons, a two-level DPI switcher, and six hotkeys. They all feel tactically sufficient, though some design choices here left something to be desired.

We consider the most important feature here to be the fact that this can be a wired or wireless mouse. While we’re not going to delve too much into the effectiveness of either, we will say that it will perform differently when in wired mode, as it is a wireless mouse. We couldn’t get the numbers on the latency when it’s not wired, but you can always reasonably expect for there to be some at some degree. It’s not a difference here, but we will say that it wasn’t very noticeable in the least. However, there’s a chance that your mileage may vary a little.

We also really like the RGB lighting system. Actually, this may be one of our favorite lighting systems that we’ve had the pleasure of reviewing. A lot of that has to do with the cool styling on the mouse itself, as the lit cracks along the mouse really make the feature stand out. The ROG Spatha has three different lighting zones, located in the side buttons, the scroll wheel, and the ROG logo. They can br programmed differently or work as a unit. In addition to their 16 million different colors, there are also six different lighting modes: trigger, breathing, cycling, static, battery, and random. All of these are pretty cool, but the one we like the most if the battery mode. It works through changing colors dependent on the Spatha’s battery levels.

But lastly, we think that ASUS knocked another feature of out of the park here and it’s their click resistance on the Spatha. The mouse comes with left and right button switches that are for light-touches, essentially rated for twitchy gameplay. On the other side of the coin, the mouse also comes with heavier switches that are made for more controlled movements. We love the fact that there is this much control, though there are a fair amount of players who may not ever use this functionality. Still, it’s a pretty awesome gesture and implementation that many companies don’t readily supply with their devices.

Though not without its flaws, the performance here is darn near rock solid, though you may experience a smidgen of performance issues if you choose the wireless mode over the wired mode. Outside of that, this behemoth is very accurate. This may have to do with its generous sensor that’s reliable on virtually all surfaces. From a DPI standpoint, you won’t feel as if you’re not getting the movements that you want, as the Spatha tops out at 8,200dpi, which allows you to easily adjust back to somewhere more comfortable and realistic.

Look, make no mistake – this is a very large mouse that’s probably reserved for very large gamers. In addition to that, it’s not the cheapest mouse on the planet, so you’re going to have maybe dig deeper in your pockets for its services. However, we do think it’s more than capable and looks as good as any mouse can. So, if you’re a person who likes a little bit of desk appeal with their high-level gaming, check out the Spatha.