It’s not a secret that gamers and Logitech have a pretty decent relationship. Of course, they have had some missteps in the past, but we don’t think that it takes away from the vast majority of awesome things that they’ve made when it comes to peripherals. Their mice are definitely something to write home about. We’ve written about their Proteus Spectrum in the past and have praised it, but we honestly believe that the G900 may supercede it in many ways.

The Charos Spectrum might actually be the finest mouse that Logitech has made. We’re not just talking about from just a design, feature, or performance standpoint. The overall experience makes this mouse legendary, and if you’re looking for a mouse that keeps you competitive you should stop the search right here. 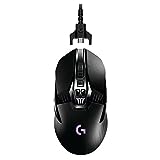 We think that the design here is top-notch. There’s really no getting around that. In an industry that has become inundated with flashy and way too colorful design, it’s a breath of fresh air to find a mouse that doesn’t scream at you too much. It’s not to say that the other mice are bad, it’s just that sometimes subtlety speaks much louder. The G900 does exactly that; it’s design is rooted in comfort without a lot of jagged edges just for the sake of being, well, edgy.

It’s a small mouse that measures 5.12 x 2.64 x 1.57 inches, 130 x 67 x 40 mm, 3.77 ounces. It’s also one that’s quite comfortable with its identifications. When you combine the small size and nice little grooves, you get a mouse that’s perfect enough for a smaller hand, though we don’t think that it’ll be too difficult for larger hands, either. What’s best about this mouse is that it feels good on either hand, making it a true ambidextrous mouse from the word go.

Button-wise, again, you’re not going to get a lot here. The Logitech can have up to 9 buttons. This would depend on how you would configure it, but the point remains the same – less seems to be more here, though the way they allow you to customize the G900 makes it shine. Depending on how you’d want to play, you can swap out, have thumb buttons on both sides, or remove them entirely. They’ve designed it this way so that you don’t have to click those nondominant thumb buttons.

In terms of the more standard buttons, they’re all pretty solid and work well. The mouse also has two DPI sensitivity buttons, which can be programed to something else if you’re not looking to change DPI sensitivity as you play.

There are three key features to the G900 that we think that we should talk about. The first would be the Logitech Gaming Software. It’s a nice little program that actually scans your machine for each game installed and automatically chooses the best profiles for those games. Of course, alternatively, you could go in and change them better fit your playing style. The Logitech Gaming Software is also really good at keeping track of your mouse’s diagnostics, including things like battery life and the like.

The wired/wireless feature is also decent in that it gives you three different ways to connect. The first is wired mode. It comes with a braided cord (a personal favorite) that’s about 6 feet long, a wireless dongle. The dongle itself can be connected either through wherever you feel is best for reception or affix it to the PC. These choices are good for people who like the flexibility of gaming in a pretty small place as well as those who have more real estate to game. Both of them will most definitely come in handy at some point or another.

Lastly, let’s talk about the battery itself. Long battery life is obviously ideal and the Logitech G900 Chaos Spectrum will more than likely fit the bill. Logitech states that you’ll get 24 to 32 hours of battery life on a 2 hour charge. These are decent numbers, but they become a bit more outstanding when comparing them against 800 charges until degradation. For the layman, this means that you’ll get over 4 years of playtime before you have to run out and buy another.

After putting this guy through the ringer, we don’t know if there are very many professional gaming mice that are better than this one. Full stop. Every movement was super crisp, every kill – whether it was a twitched based sort of thing or not – felt right. We firmly believe that this mouse is most definitely for professionals that play any game. It’s that versatile and you’ll definitely see it within the first hour.

In summation, this may be one of our favorite mice. It does a lot on the design front without being too gaudy, though, again, we’re not opposed to that. We also like the fact that the mouse itself just feels professional with its superior build quality and the numerous ways you can use it, whether it’s wired to the PC or wireless with no input lag. It’s simply an engineering marvel that won’t ask you to spare any expense for your performance.

While you may have to pay more for it, we think that it practically pays for itself within an hour or so of high-level gaming. So, if you’re a tournament gamer, or one who just likes good stuff, the G900 Chaos Spectrum should be in your shopping cart.